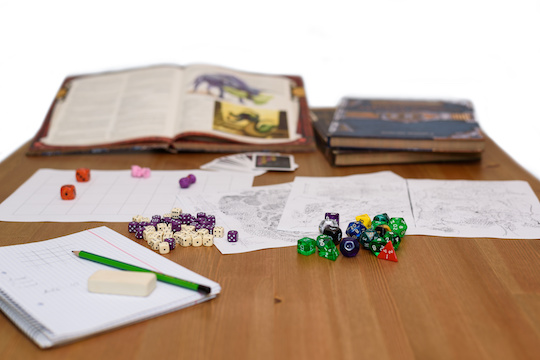 
In the spirit of full disclosure, I have been playing Dungeons & Dragons™ since 1980. I strongly believe my teenaged tenure as a Dungeon Master is what led to my adult career as a project manager and product developer — the skillset is remarkably similar.

I also believe that the D&D game system contains a lot of psychometric profiling stealthily hidden under the guise of game character stats.

D&D has seen a remarkable resurgence in recent years. What used to be the exclusive bailiwick of kids tucked away in their parent's basement, pasty from lack of sunlight and pimple-faced from a diet of pizza and Mountain Dew™, is now found across all demographics, young and old alike. I've seen C-suite executives brag about the exploits of their in-game characters on their latest quest. Even A-list celebrities like Vin Diesel and Stephen Colbert are loud and proud about their love of the game.

For those that have never played the world's most iconic role-playing game, here is a brief explanation. See if you can guess the connections to psychometric profiling.

Players (humans like you and me) take on the personas of make-believe people (characters) that go on quests, defeat challenging enemies, and claim treasure and glory. There are no winners or losers per se, and the game is very loose in the sense that what happens is not prescribed, but is instead created by the Dungeon Master and experienced by the players. There does need to be a set of basic rules that everyone follows, however.

Your D&D character has certain stats that describe what they do (profession) and how capable they are at doing it. Professions include barbarian, druid, warlock, rogue, and others. They also have a set of six stats that describe their innate abilities, each with a score ranging from 3 (low) to 18 (high).

Considering this is a blog about psychometric assessments, by now you can probably see where I'm going with this.

Barbarians are good at boldly smashing big things into smaller, more manageable pieces. Strength is a key component of that. A barbarian with a strength score of 3 is just a poser, while one with a score of 18 is the real deal.

Rogues are good at picking pockets, picking locks, and picking the precise spot in an enemy's back where a deftly thrusted dagger is most likely to kill them. As you can imagine, a high dexterity score would be very useful to a rogue.

Without this method of quantifying a character's ability to accomplish certain tasks, there would be no way to successfully form a party of adventurers that has a good chance of completing the quest.

In the business world, that is called team building. At eRep, we call it putting the right people into the right seats.

Anyone who has ever played Dungeons & Dragons has used psychometric profiles to slay dragons and get the gold without ever realizing it.

Back in 2016, I took the Core Values Index psychometric assessment and found out that I have the perfect stats for project management and product development.

→ Read "Can a Personality Test Help You Find a Job?"

My CVI profile match may not be as cool as finding out I've got what it takes to be an excellent paladin or warlock, but it is much more useful in the real world.

The game of Dungeons & Dragons lets you choose a persona that is capable of doing things only the imagination can limit. As a player maneuvering your way through the real world, you need to know what your actual stats are.

Do you have the emotional hardwiring to find success in sales or management? Can you excel in design or product development? Are you a natural leader or tenacious researcher? Do you instinctively have what it takes to motivate others?

You don't have to roll dice to find out where your strengths lie, just take the CVI and read your full report. It will give you the accurate and reliable story of what makes you tick.

The CVI is your story, where you are the hero. The best part is it's all true.


Dungeons & Dragons and D&D are registered trademarks of Wizards of the Coast LLC.