Become Someone Else (Temporarily) 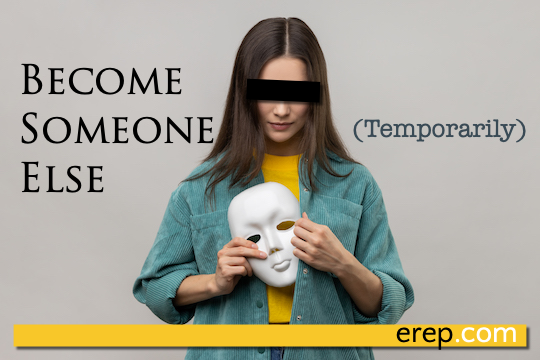 If you had to behave and think like someone else, someone totally different than yourself, how easy would it be? How long could you pull it off?

We call these personality types "core values." Read about them here and take a guess how much of each lies within you.

The majority of the time, it's best to be yourself. Learn how you are hardwired and live your life in a way that embraces it. However, there are times when you need to step out of your comfort zone and get things done that won't necessarily feel natural. That's where this article can help.


The Value of Being Someone Else

Tapping into those parts of your personality that are on the low side is possible when needed, but it may not be easy and it certainly won't be natural. It would feel like you are someone else, at least temporarily. Being this other person and seeing the world the way they do and behaving the way they would is something we all must do from time to time. With the right information and some exposure to exemplar individuals, you can develop this skill and actually make it useful.

When we see the world and ourselves through our own Core Values Index™ (CVI) lens, our perception is skewed by that lens. For example, someone who has low Merchant and Innovator scores that thinks they are very creative has a skewed perspective based on their own core values profile.

It's like someone in Minneapolis saying, "It's so very hot outside" when the temperature hits 90 degrees, while someone from Phoenix would be putting on a sweater, rolling their eyes and saying, "Oh, please."

Your perspective is relative based on your own profile.


Finding Other Sides of Yourself

Simply hanging out in airports won't give you the ability to fly.

Someone who has a lower-than 12 score in a core value energy, let's say Banker, will have a very difficult time successfully accessing and using their Banker energy if they've never been around someone with a high primary Banker score and actively studied them. Just simply hanging out with a profound Banker won't cut it, just like hanging out in airports won't give you the ability to fly an airplane.

You must study with a trained pilot and learn from them with the intention of gaining that skill.

Your ideal life will be spent living within your core values comfort zone. In those times when you must do something that requires other parts of your hardwiring, recognizing those situations and adjusting appropriately is very useful.

If your lowest core value score is Builder, for example, you will benefit by hanging around and interacting with someone who's primary score is Builder. The same would go for someone with a low Merchant, Innovator, or Banker score.

No matter who you study, pick someone who is mature in their CVI profile. This means they are positive examples of their personal energy and use it to better themselves and the people and situations around them. A red flag is when that person relies on their negative conflict resolution strategy too often or in inappropriate ways.

Don't just hang out with that person. Study their behavior and perspective from a Core Values Index standpoint. How do they communicate? In what ways do they approach challenges and find solutions? What about their primary core value energy makes them good at what they do?

Compare that person's CVI perspective with your own. Assuming their primary core value is your lowest, how can you access that energy within yourself in a manner that is productive?

By having a positive and productive example of how someone with that primary core value energy goes about their personal and professional life, you'll be better informed when you need to use that energy within your own life.