Surviving a Recession With Powerful Hiring 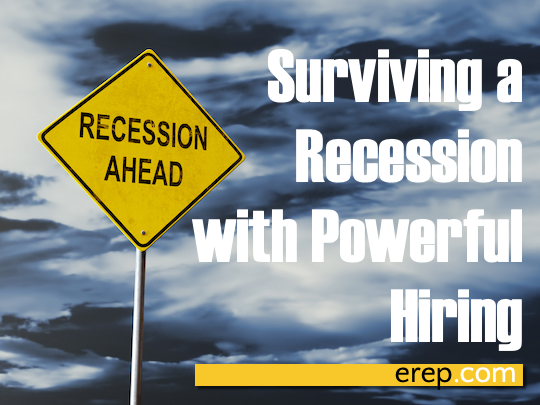 Turnover causes problems even in the best of times. Will you make it through a recession if your employees don't stick around? Here are ways your hiring decisions can enable you to survive potential economic challenges.

The Cost of Turnover

We'll get into the hard costs of employee turnover in a moment, but what are the other ways staff departures hurt your organization?

When a team member leaves, the morale of those that remain is negatively impacted. There is a question in their minds, "Am I aboard a sinking ship?"

Questions are raised about the company's leadership from the top down, both internally and out loud around the water cooler. Individuals ramp up their internal evaluation of their job satisfaction. "Do I really like working here? Could I be happier somewhere else?"

The loss of an employee impacts productivity. There is a direct hit because you have one less individual contributing to the operation, and those who remain are often called upon to shoulder an increased load. That can be survivable for short durations but it cannot be maintained without productivity suffering in expanding increments.

Customer service and sales efforts can also suffer because of turnover. Relationships with customers must be reset with someone new who may not interact the same way. Customer loyalty is reduced and that can lead directly to lower sales.

Hubspot estimated that lost productivity due to turnover costs businesses in the United States up to $1.8 trillion dollars per year.

Yes, you read that right. It bears repeating: turnover costs U.S. businesses up to $1.8 trillion dollars per year in lost productivity. All because people quit and take jobs somewhere else.

That's the big picture, but what about the direct "today cost" you experience when someone leaves? It is estimated that it costs businesses 6 to 9 months of the role's salary every time an employee has to be replaced. This entails hard costs in recruiting and training as well as lost productivity.

The scale of hard costs to re-fill a role depends on the position. For example, an hourly wage employee costs around $1,500 to replace. Mid-level or technical positions can cost between 100% to 150% of their role's salary. Replacing someone in the C-suite costs over 200% of their salary.

At the time of this writing (July 2022) many economists predict we are about to experience a recession in the United States. Inflation, recently hitting 9.1%, is making everything cost more. Even if the raw materials you need haven't gone up in price, the cost to transport them has.

With operational costs going up, can you afford the sunk cost of having to replace employees that leave for the competition?

If you invest $10,000 in new equipment or software, there is a return on investment for that expenditure. You'll gain that money back and then some in increased efficiency or expanded revenue.

If you lose an employee and have to spend $10,000 recruiting and training their replacement, that's lost money. You'll never get it back, and the longer it takes you to find a new hire just makes it cost even more.

What if you hire the wrong candidate and have to replace them a short time later?

We've been struggling through the Great Resignation for a while now.

Job candidates have a new power position at the negotiating table and many companies have been caught flat-footed.

Organizations who haven't raised wages in a while have seen employees jump ship in record numbers and are facing hard choices about how to stem the bleeding (pay more).

There are some companies, though, that haven't been hit by this change in the employment dynamic. A few have maintained employee loyalty and experienced little of the costly turnover plaguing their competition. Their teams have remained intact.

That's not the only thing separating them from the rest of the crowd struggling to stay afloat. Their employees are productive — up to 200% more than their peers. Not only do they stay loyal to the company, but they absolutely crush it when it comes to getting things done.

What is their secret? How do these companies not only keep their employees on board, but reap the benefits of rock star-level productivity as well?

→ Companies that hire accurately and follow a simple but effective formula to fuel performance don't have turnover issues.

→ Organizations that have diverse teams benefit from higher profits and higher productivity than less diverse companies.

Diversity shouldn't solely exist on the factory floor. There are tangible benefits to having diversity on the leadership team, too. In fact, according to a collaborative research team at University of Massachusetts Amherst, Vanderbilt University, and Florida Atlantic University, they found that "...a 1% increase in racial diversity similarity between upper and lower management increases firm productivity by between $729 and $1590 per employee per year."1

These benefits all come from who and how you hire. The data is clear:

Employees hired who are psychometrically aligned with the needs of the role exhibit 200% or higher productivity compared to their peers, and 50% or lower turnover.

What does it mean to be psychometrically aligned to the role?

A person's psychometric profile is a representation of their innate and unchanging nature. It is their personality's DNA. Characteristics such as creativity and innovation are common examples. Other psychometric characteristics describe how an individual prefers to communicate, their optimal learning style, or even how they respond to stress.

If you analyze the psychometric needs of a role, you have a blueprint for the type of candidate with the optimal hardwiring to fill it. Seek job candidates in many of the usual ways but also have them complete a psychometric assessment based on the same principles you used to profile the role. Compare candidate assessment results to the role's profile to narrow the field to those who are highly aligned.

Narrow down the candidate list based on education and experience requirements, conduct interviews and make an offer grounded on current market rates. (Be sure to update current employee compensation or risk their departure.)

This process is efficient and highly accurate. It also greatly reduces the opportunity for unconscious biases from tainting the selection process and that leads to greater diversity and inclusion.

Employees hired through this process stick around because they are highly engaged in their work. eRep reports that workers placed this way often report the position feels as if it was custom-made just for them. They wake up on Monday mornings eager to start their work week. Instead of dreading going into the office or job site and spending their working hours thinking, "Is there something better?" they'll be focused on the task at hand.


If you have questions about how you can implement powerful hiring in your organization, contact eRep at info@erep.com or call (503) 479-8372. Our Top Performer Profile™ tool helps you profile the role, and the Core Values Index psychometric assessment is used to narrow candidates down based on fit and psychometric alignment to that role's profile. It is easy yet powerful and can help improve your odds of surviving what may be very challenging economic conditions to come.