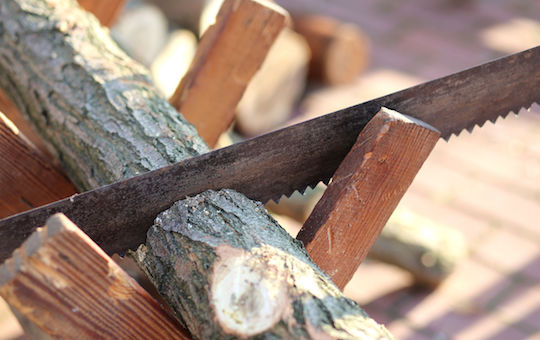 
If you have six hours to cut down a tree, spend the first four hours sharpening your saw.

It is claimed Abraham Lincoln said that. A lot of wise sayings are attributed to the 16th President, although many are apocryphal. People make these attributions to give their Hallmark-esque aphorisms a certain cachet and heft.

Regardless of the source, the aphorism about sharpening the saw says a lot about hard work, and there is a lot of depth within its wisdom to be explored. If someone uttered that phrase in a literal sense, they deserve some credit for ingenuity — cutting down a tree with a sharpened saw takes a lot less work than doing so with a dull blade.

As we dive into the depths of what it means to work hard we find a certain duality, one side overt and obvious and the other more subtle. The obvious side of hard work is the credit we give people who exhibit it. "Roberta is a very hard worker and I have always admired that about her."

If someone is a hard worker, there is an almost universal assumption that they can do anything. We belabor the point with our children ad nauseam, "With enough hard work, you can do anything you set your mind to." Although with uplifting and encouraging intent, this carries with it the nasty underbelly of hard work that exists despite our unconscious denial.

If you're working hard, you're not working smart.

Does that sound familiar? "Work smarter, not harder." Maybe it's not so subversive and taboo after all. Perhaps we have an inherent understanding that doing something in a smart way is more valuable than the more tenacious approach of raw grit and effort. Could a job candidate who claims to be a very hard worker be less desirable than one who exhibits a different tendency?

In the employment process, both sides of the negotiating table push the same message. The candidate testifies they are a hard worker and fills their resume with demonstrative evidence. The hiring manager makes thinly veiled references to hard work with phrases like, "Extra mile" and "Can-do attitude."

What would happen if the candidate said, "Some would say I'm a bit lazy at heart, because hard work is something I avoid whenever possible." They pause, letting that soak in as the interviewer looks at them with mild shock. The candidate then adds, "I prefer to find smart solutions to problems that are both reliable and efficient. This frees me to tackle more challenging problems that provide even greater value to the organization."

It is important to note that I am not confusing hard work with enthusiasm. Having a passion and genuine enthusiasm for one's work is unequivocally valuable. That's not the same as sawing furiously for six hours with a dull saw. Passion is about seeking the best way to get the job done and actually enjoying the process.

Let me emphasize that point. Enjoying the process is the key. Engaged employees are operating within goals and processes that fit their innate, unchanging nature, and data consistently shows they outperform their disengaged coworkers by up to 300%.

If you've read any of my previous articles, you can probably guess where I'm going with this.

Employees are engaged and happy when they are doing something that matches their Core Values Index profile. They naturally work smarter and actively seek the best way to achieve their goals. They wake up in the morning looking forward to their workday.

The flip side is far less pleasant.

Operating outside your CVI profile will feel like every day is spent cutting trees with a dull saw.