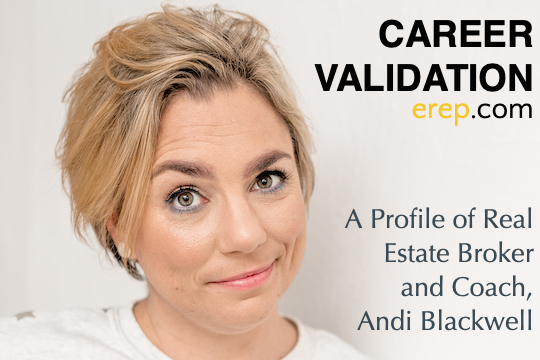 Andi Blackwell conveys a quiet intelligence and sense of wisdom that puts people immediately at ease. It's no wonder she's so successful in her career as a real estate broker and coach.

After speaking with her for several hours, it was clear that Andi is in her element, fully aligned to her role. Like many people, however, she took a curvy and indirect road to get there.

"I saw the Core Values Index as a validation that I am hardwired to be doing what I am doing." — Andi Blackwell

"The family business growing up in California was real estate, construction and development, so I was exposed to that line of work from a young age," she told me. She was a bright kid and showed a lot of promise early on, starting college at just 16. Then things got serious.

"My dad tried to teach me how to do real estate when I was only 17, going over how to do a deal, rates and the whole process — it was his attempt to pass on his legacy to me, as he had been diagnosed with terminal cancer and he knew he wouldn't be around much longer [he passed away a week after Andi turned 18]. Although I learned a lot, I didn't want to get into the family business."

She pursued higher education, studying mathematics and physics. While attending college, she got her first real job as an administrative assistant at an architectural firm, but she knew it wasn't a long-term path for her. Andi went to work at a temp agency, which had some appeal because of the variety, and she jumped around a lot.

Still young, Andi was offered a job as finance coordinator for a new subdivision in her area. It was a big opportunity but she definitely knew she didn't want to work in that environment, and it was still the same field as her family's business. She turned down the position and changed her educational track.

"I went to massage school, then opened my own business doing medical massage therapy out of a doctor's office. I did that for a bit," she explained. "Then I got married and that changed my priorities quite a bit."

Massage therapy was okay but it wasn't quite what Andi wanted. "I closed my business and changed to relaxation work at a salon. Six months after that, we had a family issue in Oregon so my husband and I moved north to be of assistance."

Bills always need to be paid, and massage therapy isn't a license that transfers easily from state to state. The easiest way to get a job in Oregon was to go back to construction so she took a job and was there for a year, but got tired of the energy that a woman has to project to be accepted in the C-Suite of that industry. "I came home one day and told my husband I couldn't do it anymore. I had to be rude or aggressive just to be acknowledged and accepted and I was tired."

More life happened. A friend offered Andi a job managing a doggy daycare, then her grandmother in Las Vegas fell ill, so Andi and her husband moved there to assist. She was able to transfer her massage therapy license to Nevada and got back into that.

"I came home one day and told my husband I couldn't do it anymore. I had to be rude or aggressive just to be acknowledged and accepted and I was tired."

Andi recognized something about herself through all these changes. "A lot of my path involved having a wide set of skills and the ability to adjust to changing circumstances because of it. This inspired confidence to be able to move around and switch modes, knowing I had the skills and options to change."

Las Vegas might be a fun place to visit, but moving there at the start of the Great Recession took a bit of the shine off the city. Facing a long journey to economic stability, Andi and her husband waited for the right opportunity to move back to Oregon. That came when her husband got a job in the room service department of a brand new hotel. Soon after they moved back to the Beaver State, Andi secured a job as an administrative assistant in a procurement company. After a year, they closed their doors and as luck would have it, the law firm in the adjacent office offered her a job. She literally took a job next door.

Her massage therapy background was utilized at the attorney's office by working on templating symptoms for injury settlements.

At about this time, Andi and her husband sought to buy their first house. The process had its ups and downs, but they had a good agent and their lender was someone they met at a first-time homebuyer's class.

About four weeks after they closed on their first home, they attended a charity event sponsored by their Realtor. There they met mortgage broker Gary Boyer. He saw her constantly surfing listings on her phone and gave her some life-changing advice.

Six weeks later Andi had her real estate agent license. That was in August of 2012. Not long after, her husband got out of the hospitality business and joined her in real estate. They've been a team ever since.

Real estate is an interesting business. Many people get started but few stick with it or make a name for themselves. The barrier to entry is relatively low compared to many other career paths, yet it has the potential to provide substantial rewards.

If you sell enough houses to high profile customers or specialize in exotic locations, you might even end up on TV.

I've met many real estate agents and brokers in my career. It's not uncommon to see the nice car and clothes and a big smile, then a year later they're selling Hyundais or managing the electrical department at Lowe's.

Real estate can be a great career but it's not for everyone.

The trick is to figure out which path is right for you without a lot of expensive and time-consuming trial and error.

Andi had a lot of trial and error in her career path.

After our first interview, Andi completed the Core Values Index psychometric assessment. Her and I separately spent a week reviewing her profile report before having a second interview.

One of my first questions after Andi took the CVI was, "Have you ever taken a psychometric assessment before?"

"Several," she told me. "The DiSC, Myers-Briggs' MBTI, Strengths Finders, and a few others."

"Did you find them to be accurate?"

"I am the sort of person that has nothing to lose by being honest," Andi said. "Because of that, my assessments have been accurate at that particular space in time for me. Obviously they have limitations. They are only as accurate as you are honest."

Tellingly, she added, "If you take the DiSC on a day when you're angry at the world, your results will reflect that."

Later, after completing the CVI, we touched on the subject of consistency and reliability. "I could tell after taking the CVI and reading my report that it would maintain much better consistency in my results over time compared to the other assessments I've taken. Your personality shifts more than your values do."

"If you take the DiSC on a day when you're angry at the world, your results will reflect that."