Can You Become a Great Musician? 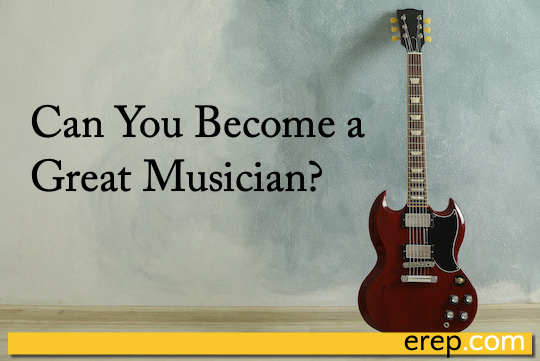 Is there an ideal psychological profile to learn how to play a musical instrument? How does your emotional hardwiring influence your ability to learn a new skill? We find out.

I have been playing musical instruments of one sort or another since I was in grade school. I started out on drums and dabbled on keyboards and played trombone in junior high. In my 20s I bought my first guitar and figured out how to play along to some of my favorite rock songs (AC/DC, mostly).

I'm also an author of a series of fantasy novels, and my current goal is to compose music that would serve as a soundtrack of sorts to my first book, Ohlen's Arrow1. This requires that I get good enough on drums, bass guitar, acoustic and electric guitar, and keyboards/synthesizer to be able to adequately perform the parts I compose.

Learning guitar has proven to be my biggest challenge.

My progress as a player up to now has been inhibited by my tendency to experiment ("noodling") rather than by taking a more formal approach to my practice. After taking the Core Values Index™ psychometric assessment (I am a 27-point Innovator and 17-point Banker) and gaining knowledge of my ideal learning style, I have embraced it by breaking my musical goals into a series of steps or individual problems to solve.

I frequently learn by watching YouTube videos from accomplished musicians and teachers2, 3, many of whom share a few things in common but have wildly different approaches to their practice routines. It becomes obvious after watching a few of them which musician-teachers are knowledgeable4 and which ones are entertaining5.

Realizing this, I began to wonder if there is a particular limit to my own musical ability. Do I have the capability to ever become the next Stevie Ray Vaughn or Eric Johnson? Is it even possible? Yes. Is it likely? No.

Are the limits to my musical abilities due to my psychometric hardwiring? Or am I limited only by my own motivation?

This begs the question:

Is there an ideal psychological profile to learn how to play a musical instrument?

There are many factors that will determine the skill level and ability an individual can reach as a musician, but their psychometric profile isn't likely to be one of them.

Your Core Values Index profile will influence how far you go in your effort to learn a musical instrument — or any skill, for that matter — if you understand how your profile influences and shapes your ideal learning style.

→ If you haven't already taken the Core Values Index, you pop over to erep.com/core-values-index/ and complete your assessment. It only takes about 8-10 minutes.

Builders prefer to learn via hands-on activities, and will learn best when they have specific goals they can check off as they progress. They are unafraid of trial-and-error. Lectures or lots of reading will bore them. Builders prefer to focus on the destination rather than the journey, and this greatly affects their learning style.

One of the best ways for a Merchant to learn a musical instrument is to join a band with other fledgling musicians. The interaction between the Merchant and others will be what drives them. Doing anything in isolation will tax their patience and they will quickly find the urge to move onto other things. A Merchant would be the profile most likely to start a YouTube channel documenting their growth journey, and would thrive on the feedback people post in the comments section.

Unlike Merchants and Builders, Innovators would be more methodical in how they approach the instrument, although they may also have the tendency to experiment and noodle around. They would do best by sitting quietly and studying the different aspects of the instrument and researching the best ways to conduct their practice regimen. They would likely approach learning the instrument as a series of logical steps, each with its own set of juicy problems to solve. They also might work alongside others to interactively progress in their ability, and might even document their progress on video with a bit more of a how-to approach, compared to the personality-based approach of the Merchant.

The Banker would be the most likely of the four core values profiles to buy a book about music theory (and actually read it) before ever buying an instrument. They would probably take lessons and would follow their instructor's advice to the letter. A Banker would probably learn how to play songs note for note, but would not likely delve into improvisation. The Banker would spend a fair bit of time learning about the history of their favorite musician, finding their love of trivia and knowledge piqued by the depth of what can be learned about music in general, as well as specific genres and musicians and even the history of specific instruments.

→ For a quick summary of how your CVI profile influences your ideal learning style, check out the article, Learn How to Learn Best.


What can keep you from getting really good?

Since the definition of what makes a good musician is mostly subjective, the gamut of different playing styles and skill levels would be as varied as the personality types who take up music in the first place.

There are many different ways to learn to play music, and there are few hard rules about what is correct or incorrect. Differing approaches will be more appropriate for specific individuals based on their preferred learning style.

Don't make a Builder read a heavy book on music theory and don't ask the Banker to learn how to play a guitar solo off the top of their head. Let the Merchant play and jam with others, encouraging the group along the way. Give the Innovator space to noodle and experiment without making them feel foolish for the noise they make along the way.

This article is about picking up a musical instrument, but it applies to any new endeavor or skill. There are very few activities that have an optimal psychological profile, but instead it is better to approach learning that skill with the knowledge of your own ideal learning style.