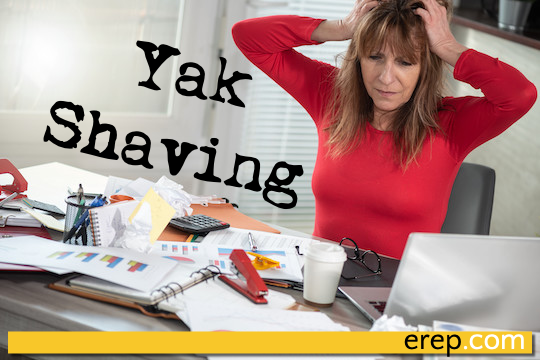 "[Yak shaving is a] less useful activity done consciously or subconsciously to procrastinate about a larger but more useful task."

Have you ever shaved a yak? It's likely you have. You began your day working on a task, got distracted by another task you discovered needing attention along the way, which led to yet another task you'd been putting off, followed by something else that popped up and seemed to deserve your attention, and before you know it the day is done. You were super busy and did a lot, but your original objective is still sitting alone in the corner in desperate need of a hug.

Did you know there's a psychological reason why you went into the bike shed, fell down a rabbit hole, and shaved a yak instead of working on your original task?


Scenario 1: Something You Enjoy

Consider this. You're a vintage muscle car enthusiast. A friend of yours called and asked you for a favor. They recently purchased a 1967 Camaro at an auction. It needs a complete engine overhaul and the interior is in really bad shape. They said if you spend a few weekends helping them get the car fixed up, they'd let you drive it for a week once it's done.

Despite the dirty and tedious work required, you eagerly roll up your sleeves and pitch in without hesitation.


Scenario 2: Something You Avoid

Now let's flip things around. The IRS has requested an audit of your previous year's tax return. Your tax accountant has said you must produce receipts for 12 different expenses the IRS has apparently declared verboten. This must be done within 30 days of the original notice of audit and you've already been dragging your feet on it for three weeks. The clock is ticking, and even though it probably won't take more than 30 minutes, you keep putting it off.

You tried to work on it one day last week, but when you reached for the shoebox full of receipts in your closet, you noticed several shirts had fallen off their old wire hangers. "I could use some new hangers," you thought to yourself. "While I'm at the store, I should get some snacks for tonight's game on TV."

At the store, you grabbed a 10-pack of clothes hangers and tossed them into the shopping cart. Its wheel was out of whack and squeaked a lot, which reminded you that you that you promised your 7-year old that you'd fix the chain on their bicycle.

"This won't take but a minute or two."

Back home, you head into the garage to work on the bike and notice a bunch of autumn leaves had blown in when the door was open. You think, "This won't take but a minute or two," and grab the broom. Once that's done you toss the leaves into the yard debris bin on the side of the house. Drat! You notice a mole has dug up a mound of dirt in your yard. You pull out your phone to leave yourself a voice message (I'm not the only one that does that, right?) to call an exterminator.

You notice three missed text messages from your spouse sharing a silly meme they found on social media. You respond, "LOL!" and go on a hunt for a crazy cat video you found earlier in the day but forgot to share. Twenty minutes later, you find the video and forward it on, along with two news articles about a particular celebrity you both follow.

Back inside the house, you look at the time and realize you still need to shower and get dressed for a fancy dinner you have scheduled with your spouse's boss. You head upstairs and notice the light is on in the spare room. You reach in to turn the light off and see a shoebox full of receipts sitting in the middle of the floor.

Why did you spend several hours of your day shaving a yak instead of spending a half hour of your time finding some receipts in a shoebox?


Do What You Love

The activities we relish and the tasks we avoid are often based on our personality, not the difficulty of the tasks themselves.

You will frequently avoid doing something that is counter to how you are psychometrically hardwired.

Alternative activities will seemingly spring up from the ground everywhere you look, providing an endless supply of distractions and other things you'd rather be doing.

Conversely, when a task is presented that is aligned with how you are hardwired, you will take action without delay or distraction.

This dichotomy seems obvious when pointed out in this way. "Of course I avoid doing things I don't like to do." But most of us don't have that thought in a conscious way. In fact, we sometimes deliberately avoid that thought, as if it's an admission that we lack certain qualities of character.

This avoidance manifests itself in our professional life, too. We will find ways to avoid or delegate tasks we don't like. Sometimes we will even unconsciously sabotage a task or produce sub-standard results so we don't get asked to do it again.

What can you do about it? How can you avoid shaving the yak?


How To Stop Shaving Yaks

First, know thyself. Take the Core Values Index™ psychometric assessment and read your report. It will describe how you are hardwired, and by that knowledge you will learn the type of activities that appeal to you and the type that make you slink out of the room hoping to avoid being seen. Most importantly, it will explain why.

Second, be honest with yourself. Recognize that you are human and every human being has innate preferences for the kind of activities that appeal to them and an aversion to those that don't.

Stop beating yourself up for not being signed as a center for the Portland Trailblazers when the reality is you're only 5' 2" tall. You have your strengths but dunking a basketball isn't one of them.

Finally, as stated, there are things you are naturally good at. Use your CVI report to identify and verify what they are (you probably already have a good idea what they are). Play to your strengths.

If you must accomplish something that is opposite of how you are hardwired, you have three choices.

Your first option, if feasible and appropriate, is to delegate the task to someone who's hardwiring is more aligned to it.

A second choice requires a bit more mental work, but can be a handy approach in a pinch, especially considering everyone comes across things they must do that can't be avoided. The trick is to find a way to approach the task in a manner that matches how you are hardwired.

For example, if you are an analytical person faced with a task that involves a lot of creativity, find a way to go about the task in a methodical way. Organize and structure your actions.

It also helps to remove distractions, set a fixed period of time to work on the task, and make sure you have all the tools and information you need on hand before you get started.

The last option is to not engage in the task at all. This often can't be avoided, in which case you should consider delegation or modulation (as described above), but there are some situations where not doing the task is a logical choice.

The classic example of this pertains to your job. If you find yourself in a job that entails a great deal of activity that isn't aligned with how you are hardwired, you might consider working with your supervisor or peers to find alternative ways to accomplish your objectives, change the details of your role, or change your role entirely. Be sure to differentiate between misaligned tasks and other causes of job dissatisfaction that may or may not be within your control.

To break out the buzzwords, yak shaving is a symptom of disengagement. If you find yourself consistently procrastinating on one task but find other tasks to be easy to take on, you are disengaged by the nature of that task. It is out of alignment with how you are hardwired. Recognize this is going on and consider your options for how to get it accomplished (or not).

Now that you have learned some ways to avoid shaving your yak, perhaps the next thing to discover is shredding the gnar.