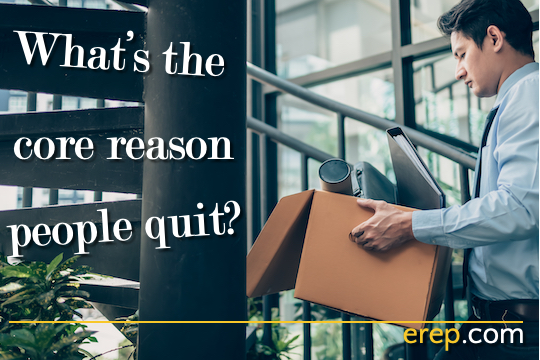 It is common knowledge that more workers quit their job because of a bad boss than for any other reason.

If this is true, it begs the question: Why are there so many bad bosses?

The Peter Principle1 likely plays a role. This is the phenomena where someone is promoted to their own individual level of incompetence. It's not uncommon for someone who is good at something to be promoted into a position of leadership above people who do that thing.

→ See: Fight the Peter Principle; How to Avoid Bad Promotions

Leadership can be taught and learned, but some people are more psychometrically wired for success in leadership than others. Before promoting someone, it's best to find out if they can swim before shoving them into the deep end of the pool.

→ See: Do you have the psychometric profile of a leader?

Workers quit jobs for other reasons besides getting away from bad bosses. Low pay, lack of safety and welfare on the job, bad location or long commute times, lack of flexibility — the list is nearly endless and can be as unique as the individual.

One of the most common reasons people leave is because of poor job satisfaction — the individual is not happy in what they're doing.

Whether a worker leaves because they are unhappy in their role, or they leave because their boss doesn't know how to lead others, there is a consistent and fundamental cause:

The individual is not psychometrically aligned with their role.

To put it simply, the worker feels like a square peg being forced into a round hole.

People find themselves in jobs that aren't suited to their particular strengths for a myriad of reasons, many of which may seem as if they are beyond the individual's control. Perhaps they had to take the first job available during an economic downturn. Or they wanted to get a foot in the door within a particular organization but their ideal position just hasn't become available yet.

Momentum plays a big part in job-worker misalignment. People find themselves in a job that makes a lot of compromises against how they are hardwired, and enough time passes that they can't seem to find a way to break out and pursue something more appropriate to their skills and passion.

Or, like our bad boss scenario, they get promoted out of a role they love into a position of leadership above their peers. The context of their job is there, but instead of having tasks and responsibilities doing the thing they love, they spend less time doing it and more time managing others who do it instead.

It is estimated that roughly 70% of people are in a role that makes them feel disengaged (bosses can feel disengaged, too). This represents huge economic opportunity on the individual scale as well as the macro organization-level scale if a solution can be found.

The problem: People who are not psychometrically aligned to their role are disengaged.

The solution: Measure the psychometric profiles of the role and the individual and then match them up.

The ideal opportunity to implement this approach is during the hiring process. Use a tool like the Top Performer Profile™ by eRep to define the ideal psychometric profile of the role, then use the Core Values Index to assess the psychometric profile of candidates. Narrow the list down to your top few highly matched candidates and conduct interviews and screening as usual.

We call it accurate hiring and it is extremely effective at putting the right people into the right seats. Individuals placed via a Top Performer Profile and the CVI often have 200% or higher productivity, and 50% or lower turnover.

This same alignment process can be used for existing personnel, too. The combination of TPP for the role and CVI assessment for existing staff can provide tremendous opportunity to adjust and match your existing team to roles that suit how they're hardwired — or adjust the roles themselves to better suit the unique attributes of the individual.

If you have a seven-footer playing point guard, the TPP and CVI would be an easy way to make a quick change that would benefit the player and the team, and likely help you win more games.