What is Your Deepest Fear? 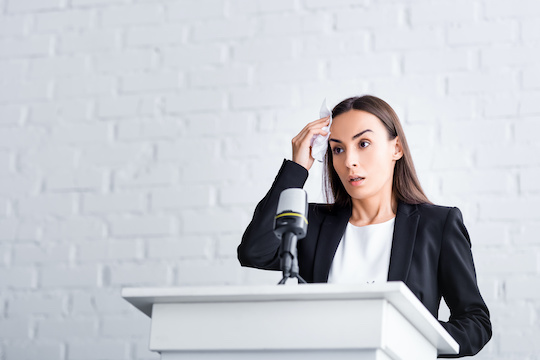 "Robert, step into my office. We need to talk," John said. He wasn't smiling.

"What is this about?" Robert asked, as he took a chair facing his supervisor's desk. John remained standing, his arms crossed.

"I had a conversation with Donna, the regional VP, and she told me that you spoke with her directly yesterday about our latest project. Why did you do that?"

Robert shrugged and said, "You weren't available and I needed an answer to a key problem the development team was facing. I didn't think it would be an issue. Besides, Donna and I already know each other. We are members at the same health club."

John stepped out from behind his desk and stood intimidatingly over Robert. His voice deepened. "How can I lead this team if you go behind my back like that? You made me look ineffective and incompetent to my boss. Don't ever do that again."

Robert left the meeting perplexed and confused, wondering what he did wrong. He couldn't understand why John had become so upset over an innocuous conversation.

Shelly had spent nearly an hour explaining to Jonah how the new web-based payment processing system worked, but it wasn't going well. She had been the dev team's chief architect on the project and was becoming perplexed by Jonah's inability to understand how it worked.

"I still don't get it," Jonah said for what must have been the tenth time. Shelly began to lose her cool when he added, "I don't think the system is very smart. It doesn't solve the business problem in a logical way."

"Yes. That's all I did at my previous job," Jonah explained. "But this system is different. I read the manual you provided, plus some tutorials I found on YouTube. I made a detailed list of several key differences."

Shelly argued, "It follows numerous best practices and even mirrors the beta system designed and presented by the vendor themselves."

Jonah pointed at his bag resting against the desk. "I have the list I made on my laptop. Do you want me to show you?"

Shelly took a deep breath and let it slowly out. "What was the last system you worked with?"

Shelly asked several more questions, diving into Jonah's experience. It began to sound like an interrogation. Frustrated, she ended the training session and said she would reschedule with another member of the dev team.

The Source of Your Biggest Fear

Why did John and Shelly get so frustrated in these scenarios? What were the buttons that got pushed for each of them, causing them to lose their cool?

There were no scary clowns, snakes or spiders, yet these people reacted in ways that reveal something deeper about their psychometric profiles. Each of these hypothetical scenarios point to how different personalities react in situations that challenge their deepest fear.

John got angry because his subordinate, Robert, went behind his back. By talking to John's supervisor, this made John feel powerless. Feeling powerless is John's deepest emotional fear.

Shelly got agitated because she felt Jonah was questioning the wisdom of her design. By not understanding how it worked, or challenging the logic and rationale behind its design, he was in effect telling Shelly that she was foolish. Being foolish or unwise is Shelly's biggest fear.

We often talk about the positive hallmarks of each of the four core value energies revealed in the Core Values Index psychometric assessment. Each of these energies have an associated fear.

A core value's deepest fear is the opposite of its primary energy.

For example, Builders are all about power and action. They like to take charge and get things done. A Builder's deepest fear is to be powerless. (John's primary core value energy is Builder.)

An Innovator's primary energy is wisdom. They feel there is no problem they can't solve. What is their biggest fear? To be foolish or unwise. Telling an Innovator "I don't get it" or "You're wrong" is the quickest way to make them react. (Shelly's primary core value energy is Innovator.)

Merchants are all about being the presence of love in the room. They express this love by establishing emotional connections and building consensus with others. Their strongest desire is to be worthy of that love. This means their biggest fear is to not be loved or to not be worthy of love.

Bankers thrive on gathering and sharing knowledge. They do this with a strong sense of justice, dispensing their vast knowledge only with those they feel deserve to receive it. How do you touch on a Banker's deepest fear? Make them feel ignorant or unjust.

What Are Your Motivations?

One of the ways we can understand ourselves better is to understand our emotional motivations. They say that over 90% of the decisions we make are based on emotional factors. Up to 95% of our actions and responses throughout the day are unconscious or controlled by the subconscious mind.

Fear is a significant factor in our emotional decision making. Many of our choices are based on the avoidance or reduction of fear.

The importance of understanding your own fear-based drivers cannot be overstated.


To gain a deeper understanding of this connection between your primary core value energies and fear, we highly recommend taking the CVI, then reading The Core Value Handbook by Lynn Ellsworth Taylor. It is a 173-page eBook that is included free with your full CVI results package. It describes how your deepest fears drive your emotional decision making, and how you can recognize your fear responses and act in an appropriate and constructive manner.

When you are interacting with someone and notice that they are going into a conflict resolution mode, their primary core value energy is likely feeling threatened. Do or say something that puts their fear to ease. Make the Builder feel powerful. Make the Merchant feel loved. Make the Innovator feel wise. Make the Banker feel knowledgeable. This will go a long way to improving your relationships with others.