The Psychometric Profile of Action Heroes: Using the Core Values Index Without Even Knowing It 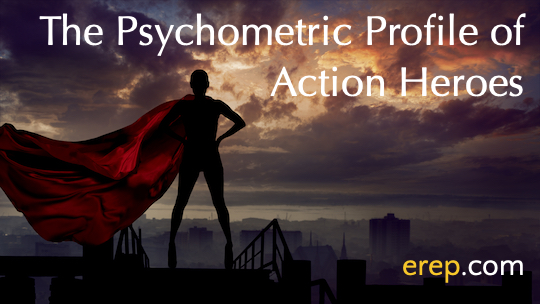 The arrow sank deep into the creature's throat and it fell backwards in a spray of blood, twitching and clawing at the wooden shaft protruding from its severed windpipe. The man lowered his bow and crouched behind the bushes in case there were others. He watched and listened to see if he had stumbled upon a lone cru'gan or if it had been part of a patrol. The only sound was the wet gurgling coming from the cru'gan's throat. Soon it lay still and silent, and the only thing the man could hear was the evening breeze through the pine trees.

After several minutes passed, he retrieved his arrow and quickly searched the beast's body, then rolled it out of sight under a pile of briars. He kicked dust over the creature's blood, and then moved silently away into the forest amidst the diminishing evening light.

This is the opening scene from my debut fantasy novel, Ohlen's Arrow1. I won't give the plot away, but the main character, Ohlen, can best be described as a Viking version of John Wick.

Some of the articles I've written for eRep have entailed guessing what the likely Core Values Index™ psychometric profile of fictional characters might be, from Ferris Bueller to John Wick. It's interesting to go back and look at what the likely profile is of Ohlen, the main character in my own book.

Considering I wrote Ohlen's Arrow before I had ever heard of the Core Values Index psychometric assessment, it's fascinating to see if my portrayal of this fictional character fits a particular profile.

I won't give away any spoilers for those interested in reading my book, but I will say that Ohlen is likely a Builder/Innovator, with a reasonably high Banker score in his tertiary position. His Merchant score is most likely low, in the single digits. Here's why.

Ohlen operates independently. Independence is a hallmark of Builder/Innovators (and Innovator/Builders, too). He never shies away from a tough challenge, always seeking ways to overcome obstacles — Ohlen is an action-oriented problem solver.

The main character never hesitates to act and has great faith in his own abilities. In fact, self-confidence is one of his hallmark characteristics. This is classic Builder personality.

I mentioned that Ohlen's strong tertiary core value is likely Banker because one of the things that drives him in his relentless pursuit of his enemies is his sense of justice. He has a very clear view of right and wrong. A Banker's catalytic emotional energy is justice.

I completed Ohlen's Arrow in 2013, but didn't take the Core Values Index psychometric assessment until 2016. Since taking the CVI™, I have found myself looking at fictional characters in books, movies and TV shows with a curious eye, always seeking to identify what their likely CVI profile might be.

What fascinates me is that authors and screenwriters write characters that seem to perfectly fit the particular CVI profiles that make the most sense. They do this without any likely knowledge of the CVI or how it works.

[If you are an author or screenwriter that has taken the CVI, drop me a message to share your thoughts. blog@erep.com]

Most of the loner action hero archetypes tend to be Builder/Innovators. They never lack confidence or the faith in themselves required to act decisively, and they have a penchant for solving tough problems in a pinch. They also tend to lack the Merchant's "I want to please everybody" charm. (James Bond and Tony Stark are two exceptions to this, both likely Merchant/Innovators or Innovator/Merchants).

This validates the legitimacy of the CVI as a whole. It just makes sense.

The best heroes and heroines have certain personality types, and the same goes for villains, too. Supporting roles fill niches and needs in the story and must do that with psychometric profiles that differ from the protagonists in complimentary yet non-overlapping ways.

Writers often profile their fictional characters without even realizing it.

I did the same thing with the characters in my books. The main protagonists and antagonists have the psychometric profiles needed to serve the story. Their behaviors and way of seeing the world in which they live align perfectly with their profile.

Since learning about the CVI, I have begun using my knowledge of how it works to develop profiles that best serve my characters. I write their action and dialogue specifically to fit the profile I assigned to them.

Even if I didn't know about the CVI, I'd likely be unconsciously creating specific CVI-esque profiles of my characters.

It's highly doubtful that the writers of John Wick or Ferris Bueller's Day Off had any clue of the CVI's existence or how it works, yet their characters magically fit the psychometric profiles to perfectly serve the story.