The Myth of Multitasking and How Your Hardwiring Determines Your Productivity 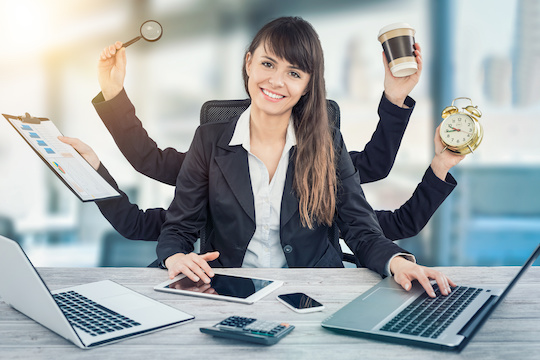 
Labeling yourself as a multitasker was a hot trend on resumes — and sadly, still is — despite the fact that it's an utter and outright myth. [1]

No one can multitask.

It's not possible to truly focus on more than one thing at a time. What really happens when someone thinks they are multitasking is a process of rapidly switching between individual tasks or areas of focus.

Perhaps we should call it RST, or Rapid Serial Tasking.

What is true is that some people are hardwired to rapidly switch tasks more effectively than others.

This supposed super power is highly appropriate in some roles, to be sure. But it's not necessarily a requirement for all roles. In fact, this natural ability can be a liability in certain circumstances because it may manifest as the inability to stay focused on one thing when needed.

Everyone can be productive in their own way. It all comes down to the needs of the role.

If you have never taken the Core Values Index psychometric assessment, hop over to erep.com/core-values-index and do so now. It only takes about 8 minutes to complete.

After completing your CVI, you will find out what your primary and secondary core value energies are from four available types:

We each have a certain amount of these four energies within us, and it is the ratio of these energies that define who we are.

Each of your four core value energies are measured on a scale from 0 (none) to 36 (maximum). Your total score equals exactly 72, which means if you are high in one or two core value energies, the others will be proportionately lower.

There are millions of different score combinations.

Your primary core value energy determines most of your dominant personality traits.

As an example, my CVI profile is 27-Innovator, 17-Banker, 15-Builder, and 13-Merchant. Because of this profile, I refer to myself as an Innovator/Banker, or just an Innovator.

Your primary core value energy explains a lot about how you process information and focus on what needs to get done.

How You Can Be Productive

Here are some examples of how your primary core value energy determines the best way for you to be productive:

Builders are all about power and action. They rarely hesitate to decide or act. Because of this, they can sometimes get bored or frustrated with situations that take a lot of patience. Builders will get things done, but are best at delegating more time-consuming or tedious tasks to others. They make great leaders because of these qualities.

Merchants are probably the closest to what people consider multitaskers of all the four core value energies. Their minds are always scanning and processing the things going on around them, anticipating what could be. This is a manifestation of their intuitive creativity. It can sometimes be easy for a Merchant to become distracted when they are doing something that lies outside their primary core value. For example, a Merchant/Builder with a low Banker score would find reviewing financial statements to be a challenge — not because of a lack of aptitude, but from a requirement of focus that lies outside their comfort zone.

Innovators are the problem-solvers of the world, and that plays a big role in determining their focus. Nothing makes an Innovator happier than tackling a challenging problem. Throw something at that them that is routine and doesn't have a problem that needs to be solved and they can easily become bored. However, the Innovator will be adept at creating an efficient system or tool that does the work for them. Robots on automobile assembly lines were no doubt invented by Innovators.

Bankers are perhaps the most linear thinkers of all in the Core Values universe. They thrive on the consumption of knowledge, keeping it ready to share with those who need it most. Unlike Merchants or Builders, they enjoy staying focused on one topic at a time until they feel the entire depth of the subject has been explored. What would bore a Builder would thrill a Banker.

Understanding the way each of the primary core values thinks and processes is important when seeking alignment between the role and the individual that fills it. As the apocryphal saying goes, "Everyone is a genius, but one does not berate the fish for its inability to climb a tree." The fish is really good at some things, just not scaling a Douglas fir.

Some roles require the ability to rapidly switch between tasks, while others demand uninterrupted focus. A person's specific CVI profile will play a huge role in determining fit for a given role.

Ultimately, the best approach is to define the needs of the role and find the CVI profile that suits it.

At the end of the day, putting the right people into the right seats is what it's all about.