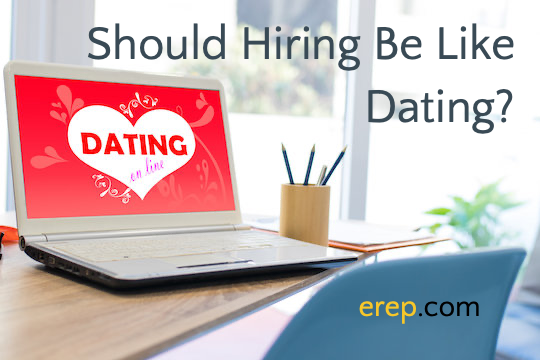 Do you want to begin a long-term relationship based on a hunch? Are you so good a judge of character that you can tell on a first date if someone will still be an excellent life partner 30 years down the road?

Or should you get some facts first before you make up your mind?

Perhaps dating and hiring have a bit more in common than we thought — if not, perhaps they should.

Hiring, like dating, should entail the gathering of a few facts first.

What do you have in common? Do both of you share similar long-term goals? Do you have relatable backgrounds? For instance, if you are hiring an administrator for a large medical office, would you interview a candidate who's previous job was the foreman of a lumber mill?

If you are hiring an administrator for a large medical office, would you interview a candidate who's previous job was the foreman of a lumber mill?

Many people seek relationships via dating apps, some of which have become very successful, like eHarmony™ and Match.com. They gather numerous types of information and use algorithms to find matches between individuals who share a lot in common and have similar tastes.

Why should hiring be any different?

[Editor's Note: eRep's use of the Core Values Index psychometric assessment and Top Performer Profiles™ has been described as the eHarmony™ of the hiring and recruiting world.]

Experience is easy to match up between a candidate and the requirements of a job. Hiring a lumber mill foreman for a medical office administrator position is an obvious mismatch and would be easy to spot, even for the most basic hiring AI system.

What about personality? Many in the dating world would say personality is their number one priority when determining compatibility between two people. If you can't get along, none of the other commonalities two people might share would matter.


Can you determine personality compatibility in hiring?

Other aspects of personality, such as maturity, character, and tenacity, can be gleaned during the interview process (assuming the hiring team actively works to avoid cognitive biases in the hiring process).

The purpose of dating apps is to determine with as much accuracy as possible the likely compatibility and the prospects of long-term happiness together. The purpose of hiring systems and processes should be the same: Use every bit of ethically appropriate (and legal) data available for both the candidate and hiring organization to determine the likelihood of success, engagement and happiness for both sides.

Hiring for cultural fit is an aspect of talent acquisition and recruitment that opens a can of worms. There are strong beliefs and opinions about culture and cultural fit that fall across the spectrum — and at polar ends of that spectrum.

Regarding the comparison between hiring and dating, is hiring for cultural fit the same as making sure you get along with someone's family before you start dating them? Perhaps. But in this case it's often the family that's evaluating the suitor.

Imagine a phone call or Zoom session with someone you met on a popular dating site. According to the site's algorithms, your compatibility is high and the two of you share a lot in common. But, during the call the other person's parents come on and start asking you questions.

"Where did you grow up?"

"Are your parents still alive? Were they ever married? If so, are they still together?"

"Do you plan to have children in the next five years?"

And then things get a bit more serious. The parents start asking some rather pointed questions that make you very uncomfortable.

"We want to make sure you'll fit in with our family. To do that, we're going to ask you a few things that may make you uncomfortable, but we need to know before we allow our son/daughter to date you."

You consider stopping the call but press ahead anyway. "Ask your questions," you say.

Now imagine an employer asking you these questions during a job interview. To do so would be a violation of many laws and ethical rules, so less-than-honorable employers will ask leading questions to glean the answers without violating the letter of the law.

These type of queries are often viewed by the employer as an effort to determine cultural fit.

Sometimes the excuse of cultural fit is given by the employer when an otherwise well-qualified candidate is denied the job due to race, sexual orientation, politics, religion, or many other protected classifications.

Cultural fit has been used as a code word for what would otherwise be illegal, unethical and immoral discrimination.

Although it is a good thing for a candidate to fit in with the rest of the team, using a predetermined concept of culture to determine fit has many challenges and potential pitfalls, even when unintended. It is arguably better to hire the best candidates for each role and allow your culture to grow organically.

Hiring should use ethical and legal data points, which should include psychometric profiles from the Core Values Index, to determine likely fit between candidate and role.

With some exceptions, AI systems aren't yet at a level of maturity or sophistication to accurately make hiring decisions without the risk of bias creeping in, but they can do a lot of the bias-free heavy lifting (computers are really good at that, actually).

In today's state of #TheGreatResignation, job listings should be both catchy and honest, just like dating profiles. And like the dating scene, nothing will turn candidates away faster than being lied to.

In the end, though, a good hire is a mutual decision between two parties — candidate and employer — for hopefully mutual long-term gain. Both parties need to evaluate the relationship with eyes wide open and ledgers fully stocked with as much valid and ethically available data as possible, especially the psychometric profile of both the candidate and the role.

When a match occurs and the right person is placed in the right seat, magic happens.