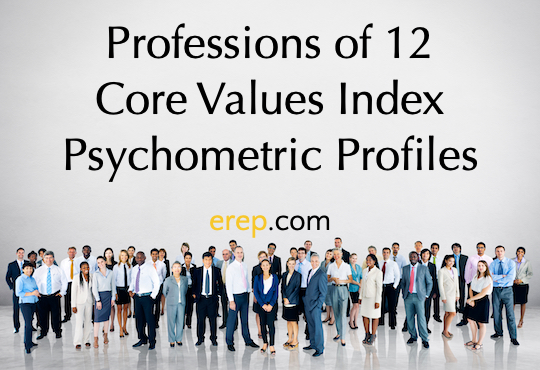 The Core of Your Personality

There are four core value energies represented in the Core Values Index psychometric assessment. Each person has a particular combination or ratio of these energies that comprise their personality.

Within your profile, the amount of each of the four energies is measured in points from 0 (none) to 36 (maximum). The sum of your four scores will always be exactly 72. There are millions of different possible core values index profiles.

In CVI parlance, we refer to ourselves by our top two core value energies — primary and secondary. For example, my profile points are 27-Innovator, 17-Banker, 15-Builder and 13-Merchant. My primary core value energy is Innovator and my secondary is Banker. This means I refer to myself as an "Innovator/Banker."

Unless they share the same score, your primary core value energy is the dominant force behind your personality, but your secondary core value influences it.

That's why two people who are, for example, an Innovator/Banker and an Innovator/Builder will exhibit different personalities even though the dominant component of their personality is Innovator. They'll share a lot of Innovator traits, but their secondary core values will influence and shift them — depending on their scores.

To help highlight and explain how these primary/secondary scores influence personality, I have created a list of the 12 primary/secondary combinations and some common professions that would likely fit those profiles. Where appropriate, I have also included some famous characters from fiction and my best guess of some real life folks who likely have those core values index profiles.

Before we begin with the list, here is a quick summary of the four core value energies and their catalytic values.

Catalytic values can be considered secondary traits of each core value.

Builder: Power and action, with a catalytic value of faith. The Builder never lacks confidence and faith in their intuitive trust that they know what to do and will always know what to do next.

Merchant: Love and connectedness, with a catalytic value of truth. Truth is having a clear view of what is real and an intuitive and rational understanding of the way things are.

Innovator: Wisdom with a catalytic value of compassion. An Innovator's compassion helps them remain empathetic and curious regardless of the behavior of others.

Banker: Knowledge, with a catalytic value of justice. This means the Banker ensures the equity of access, accountability, compensation, and opportunity.

What would be a representative profession for each of the 12 CVI primary/secondary profile combinations?

Merchant/Builder: Merchants are all about love and connections with others, and their Builder secondary core value energy gives them confidence to get things done. They are excellent motivators and leaders.

Merchant/Banker: Merchants are driven to connect with others, and their Banker energy motivates them to act through a foundation of knowledge and justice. They have an organized approach to group activities.

Innovator/Builder: Innovators like to solve problems, and their Builder secondary core value confidently drives them to get things done. They often prefer to act independently.

Innovator/Banker: Take a wise and problem-solving Innovator, then add a healthy dose of the Banker's drive to gather knowledge. They will tackle challenging problems with well-researched solutions.

Banker/Builder: Bankers love nothing more than to gather and share knowledge with a strong sense of justice. Their Builder secondary core value motivates them to do so in an action-oriented and definitive manner.

Banker/Merchant: The knowledge gained and shared by the Banker is done so with the loving and truthful connectedness of their Merchant secondary core value. They take delight in sharing their knowledge with others.

Banker/Innovator: A bit more studious and cautious than their Innovator/Banker cousins, the Banker/Innovator places a higher value in gathering facts and knowledge before solving problems, driven by their secondary Innovator core value.

Builder/Innovator: Builders like to get things done and their Innovator secondary core value motivates them to eagerly tackle the most challenging problems. Builder/Innovators are the most independent of the 12 primary/secondary profile combinations. They act boldly and confidently in creative and innovative ways.

Builder/Banker: Getting things done, as driven by their primary Builder energy, is most valuable when it is based on facts and knowledge as specified by their Banker secondary core value. They act confidently but with a strong sense of justice and truth.

Builder/Merchant: Few individuals lead others as boldly and confidently as Builder/Merchants. The figurative and sometimes literal monuments they build are nothing without the appreciation of others.