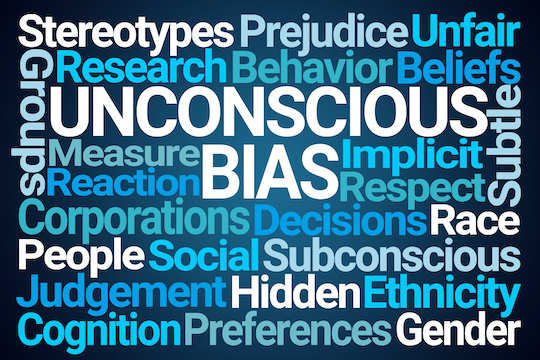 We all have biases and perceptions of stereotypes in how we view others. We immediately identify differences between ourselves and other people. Our brains are hardwired to recognize patterns and deviations in expected patterns. Social programming layers itself on top of that hardwiring and corrupts it by reinforcing needless and immoral stereotypes.

The Caveman brain, or lizard brain as many people refer to it, is that automatic, base-level functioning our brain provides that is meant to keep us alive. It is in charge of "fight, flight, feeding, fear, freezing up, and fornication." [1]

This part of our mental functioning is devoid of analysis or reasoning in our common understanding of the terms. We don't 'think things through' when our lizard brain is in charge. It is a master of jumping to conclusions very rapidly because when it comes to fight or flight, delay can get you killed.

The problem is, our lizard brain's predilection to quickly latching onto conclusions also frames our perceptions of the immediate world around us in ways that may not be accurate. We can see risk or threat where it doesn't exist, and that's where the problems start for our modern lives.

One of the more insidious ways our lizard brain incorrectly skews our thinking is how we perceive people who are different than ourselves. When we meet someone new, our caveman brain rapidly classifies that person into simple categories such as "threat" or "friend." It is a type of basic stereotyping. We can't help it, but we can retrain our brain toward a state where we assume new people are friends and not foes.

As we progress through life from childhood into adulthood, we are exposed to massive quantities of bias programming. Television and mass media make up half of our programming, and interpersonal programming makes up the other half.

Media takes a trope and repeats it ad nauseam until we automatically assume it's true. Without realizing it, we are being programmed from the conscious top all the way down to that lizard part of our subconscious to assume that people of certain characteristics are foes and not friends. Have you noticed that all terrorists in action movies are swarthy Middle Eastern men? That is not by accident, nor is the fact that hoodlums are nearly always played by young black men in hoodies.

We are programmed to adopt stereotypes through interpersonal relationships, too. Our parents and family members influence us from our earliest childhood to see the world and everyone in it according to their stereotypes. "I was raised a ___ because my parents were ___."

It has been said that racism is taught, and that is true. [2] Our lizard brain notices differences between ourselves and others, but it is our socially programmed brain that learns to make judgments based on those differences.

Although this psychometric lens operates at a very fundamental level in our brain, it is something that can be overcome. By taking the Core Values Index psychometric assessment, you can learn how your brain is hardwired and learn how you see the world. You can also learn the other psychometric profiles and gain a greater understanding of other people's perceptions and hardwiring. It is a tremendous resource for personal growth.


Reprogramming Our Biases and Stereotypes

Our lizard brain quickly identifies differences. Our socially programmed mindset makes us form judgments about that information. These two types of bias and stereotyping happens in that order, and we reprogram our judgments by taking steps in the opposite direction.

Through education, we learn that the tropes and stereotypes we've been taught implicitly and explicitly to be true are often false. The examples of these falsehoods are too numerous to list here, but a classic example has to do with the perceived threat of terrorist violence:

When we expose ourselves to the facts behind common stereotypes and biases, we learn that the reality of how we were programmed is often very different. In a similar parallel to Cognitive Behavior Therapy, by recognizing our basic reactions and thoughts and consciously reminding ourselves of the facts, we begin to deprogram our underlying biases and stereotypes until they become more aligned with reality.

→ See: Taming Your Reactions to Stress with Cognitive Behavioral Therapy and the CVI

It is through this top-down reprogramming that we can get rid of harmful and immoral stereotyping, racism, biases and prejudices, and raise our thoughts and emotions to a higher, more just and moral level.

[1] "Your Lizard Brain: The limbic system and brain functioning", https://www.psychologytoday.com/us/blog/where-addiction-meets-your-brain/201404/your-lizard-brain