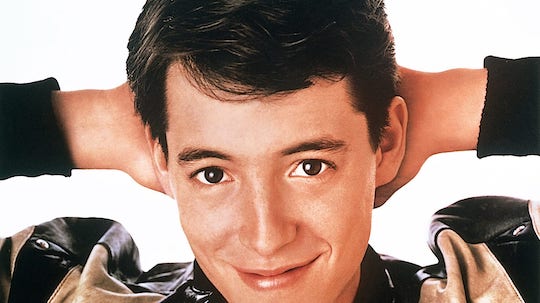 
"Life moves pretty fast. If you don't stop and look around once in a while, you could miss it."

We know and love that famous quote from one of the coolest kids to ever graduate high school despite 10 unexplained absences. He could get you out of summer school, show you the best parts of Chicago, sing to you in a parade, and convince his parents he was a sweet, innocent teenager hoping to make it into a good college, all in a single day.

His name is Ferris Bueller and he was my hero. Ferris Bueller's Day Off came out the summer between my Junior and Senior years of high school and I wanted to be like him more than anyone else. To me, he was like a teenage James Bond, fearless in the face of danger and always a hit with the ladies. Nothing phased him.

In my awkwardness and angst so common amongst my peers at the time, I felt more like his neurotic best friend, Cameron Frye. Too bad my parents drove a Ford and not a Ferrari. Que bella.

I've seen Ferris Bueller's Day Off over 100 times (seriously) since it came out in the summer of '86, and after re-watching it since learning about the Core Values Index psychometric assessment, I thought I would take a stab at analyzing Mr. Bueller's CVI profile.

Ferris is fearless. As his friend, Cameron, said, "There's nothing he can't handle." Throughout the entire movie, Ferris never lacks confidence, even when the odds seem insurmountably stacked against him. When Cameron suggested they surrender, Ferris said without hesitation, "When the meek get pinched, the bold survive."

There is nothing more representative of a Builder's confidence than that.

Ferris was quite the charmer, too. "How did you get so sweet?" his mother asked. "Years of practice," was the answer from behind a saccharine smile. He handily maneuvered his way through the adult world in which he would soon enter, sociable and deftly charming and witty. Ferris intuitively knew where he stood with others and how they saw him, and he played each situation with a virtuoso's gift.

Ferris could think quickly on his feet and solve challenging problems with remarkable creativity. That is an Innovator's trait, and that energy was close at hand for Mr. Bueller to access when needed. It wasn't his primary characteristic, though.

The core value energy Ferris never uses in the movie is Banker. He was too busy acting boldly and winning over others with his charm to waste time gathering data and facts. The Banker energy needed for that was remote and arguably never accessed as far as we can tell. Ferris would rather hack a computer and change his grade than actually study for a test on European socialism.

He's not European and doesn't plan to be one, so why would he give a crap if they're socialists?

We'll list his Banker energy as the lowest of his four core value scores.

In the end, what kind of CVI profile does Ferris Bueller have? He seems to have equal amounts of Builder and Merchant energy, but between the two, Builder is likely his primary score. We'll estimate them to be 22 points each:

His Innovator score isn't too far behind, but is definitely in the tertiary position.

Since a CVI profile's scores must total exactly 72, that leave 10 points for Ferris's Banker energy. He never uses it in the movie, so that would fit into the 12-points-or-less rule: any core value energy score of 12 points or less is rarely accessed.

Ferris Bueller is likely a Builder/Merchant, with a CVI profile of:

Maybe he is the walrus. That doesn't seem to hurt him, though. He definitely has a knack for bumming sweet rides off of people.