Find Out What Scares You Most 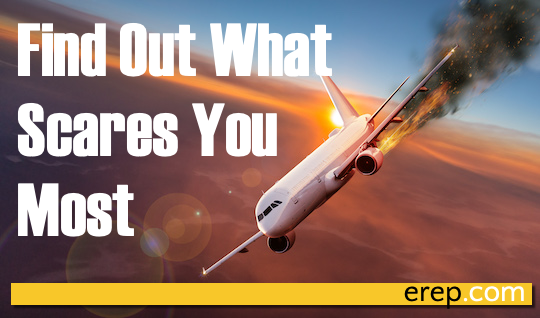 What inspires you can also tell a lot about what scares you. In fact, your greatest fear is most likely the exact opposite of what energizes your soul and delights your spirit.

Spiders and Snakes and Sharks, Oh My!

When you ask most people what their greatest fear is, you'll get the typical responses of spiders, snakes, heights, or one of the most common answers, public speaking (and yet some who read this article actually thrive on it. Odd.)

Other than being asked to give a speech in front of a group of strangers, these common fears have something in common: physical harm or even death. Although to be fair to our arachnid friends, death by spider bite is extremely rare, but the fear of it is definitely real enough to most people.

To be specific, the fear of spiders is outsized compared to their actual risk to life and limb. Although they seem to be everywhere, most bites that people experience and attribute to spiders are actually from other insects such as mosquitos or fleas.

Do you remember the urban legend that claimed the average person swallows eight spiders in their sleep each year?

Thankfully there's no evidence for spider swallowing occurring at all, and if it did, it would be such a rare occurrence that it would be considered a freak accident.

Sharks are another source of fear where the perceived risk is far higher than the actual risk. In fact, you're more likely to die of drowning (1:1,134 odds) waiting for a shark to come and attack you than you are of a shark actually attacking and killing you (1:3,748,067 odds).

Drowning is 3,305x more likely to kill you than a fatal shark attack.

Another is flying. There are many people — perhaps you are one — who refuse to fly but would be quite willing to give someone a ride to the airport. Guess which activity is actually more dangerous? You guessed it, driving.

To be blunt, most fears are all in your head.

Here's the truly interesting part. Whether it be spiders, snakes, sharks, or flaming airplane crashes into the side of a mountain, none of them are actually what scare people the most. In fact, there are four greatest fears that can affect each and every one of us in a deep and profound way. And there's a way to predict what they are.

You can learn what your greatest fear is by taking a personality test. Seriously.

According to the Core Values Index™, the world's most accurate psychometric assessment, there are four main personality types that exist in different ratios within every individual. Each of these personality types, or core value energies as they're called, represent distinct personality characteristics. Each has a specific fear associated with it. Read on to learn what they are.

The core values are called Builder, Merchant, Innovator, and Banker. You have a particular ratio or amount of these core values within your innate, unchanging personality. If you have more of one core value, you're likely going to have less of the others.

It is your combination of core values and your particular experiences that make you unique.

As you might have guessed, each core value describes different aspects of your personality such as how you like to communicate, your learning preferences, the way you react to stress, and even the type of work you prefer to do — and how you like to do it.

The first step is to find out how much of each core value resides within your personality's DNA by completing the CVI. Are you well-rounded with relatively equal amounts of all four? Or is your personality profoundly dominated by one or two core values while the others have little to no representation within you?

When you take the CVI, you receive a set of four scores, each representing how much of that particular core value exists within your personality. Each score can be from 0 (none) to 36 (maximum), with the total of all four scores summing to exactly 72.

Each of the four core value energies represent certain dominant personality types. These are:

Once you've taken the CVI and determined your scores — how much Builder, Merchant, Innovator and Banker core value energy exists within you — you can quickly learn your greatest fear.

For example, let's say you complete the CVI and find out your scores are:

This means your primary core value energy is Builder, and it represents the majority of your personality.


A person's greatest fear is the opposite of their dominant core value.


A person with a primary core value of Builder is all about power and action and having faith in themselves that they can accomplish anything they set their mind to. Getting things done is what thrills them the most. If power is a Builder's dominant personality trait, the opposite of that is feeling powerless.

A Builder's greatest fear is being made to feel powerless. Obviously, feeling powerless can come about in many different ways. Being a passenger onboard a crashing airliner would make anyone feel powerless, but that aspect of it would likely affect the Builder the most.

You can also make a Builder feel powerless by showing them that their attempt to take control of the situation has no affect on you. Nothing they say or do can sway your viewpoint and this will quickly aggravate and agitate them. They will resort to their Conflict Resolution Strategy of intimidation by getting loud or assuming threatening postures such as standing above you or getting in your face.


What if your primary core value is Merchant? Since a Merchant's core value energy is about love and truth, the opposite of that is feeling unloved or being unworthy of love. This is a Merchant's greatest fear.

How do you make a Merchant feel unworthy of love? Reject what they do or say, making it clear that they are not deserving of your attention or that you don't believe them. Say things that convey, "We don't want you here" or "Your views don't matter." Another is "I wouldn't follow you out of a burning building" (this is because Merchants love to organize and motivate groups to pull together toward common goals).

When a Merchant experiences their greatest fear of not being loved or not being worthy of love, they will react with their Conflict Resolution Strategy of manipulation. They will say things to make you feel bad (and they can be very good at this) or they will convince others that you are bad and that everyone should gang up on you.


Innovators are all about wisdom. They love to solve problems and are intuitively convinced that there isn't a challenge out there that they can't solve. The converse of this is to feel foolish or unwise.

An Innovator's greatest fear is being foolish or being seen as unwise. Tell an Innovator, "You're not capable of solving this problem" or "I don't have confidence in your ability to handle this challenge" and they will instantly resort to their Conflict Resolution Strategy of interrogation. They will ask leading question in an effort to make you realize you are the foolish one, not them.


What about Bankers? Since a Banker's top goal in life is to be knowledgeable and to gather data, what would be their greatest fear? It's the opposite of what drives them, so their greatest fear would be ignorance or the perception that they are ignorant.

Say to a Banker, "You don't know what you're talking about," or "What you said is incorrect" and their Conflict Resolution Strategy of aloof judgment will instantly kick in. They will withhold valuable information from you because they have justly (in their mind) deemed you unworthy to receive it.


Fear Isn't One Size Fits All

These four core value energy types don't exist in isolation within you. Instead, you have a particular ratio or combination of these energies. In our example of someone who's a 27-Builder, 21-Merchant, 16-Innovator and 8-Banker, they have various amounts of all four fears within them. It's all relative, though, and someone who has a profound score (27-Builder, in this case) in one core value energy is dominated by that energy. Their lowest energy — 8-Banker in this case — has very little influence on their personality.

The trick is to take the CVI, get your scores, and find out how much of these four core value energies make up your particular innate personality. If you have a fairly well-rounded profile, or even a perfectly 'square' profile of 18 points in all four, then the greatest fears of each core value energy can affect you equally (lucky you).

When you complete the CVI, you get a report that describes the influences on your personality, what your greatest fear is, and how you will likely respond. It is insights like these that provide the knowledge you need to understand how you tick and how better to navigate your way through the world, both personally and professionally. It will also help you overcome your greatest fear.

It also helps you understand why others behave the way they do and that can be profoundly useful.