Can You Nurture Creativity Out of Nothing? 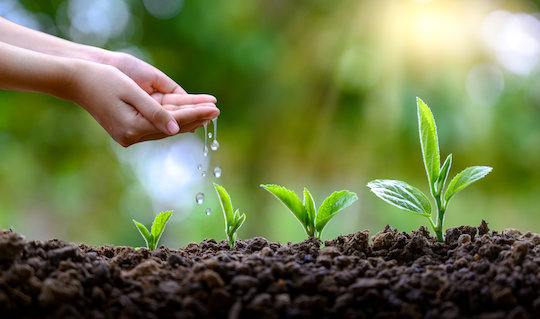 What does it mean to be creative? Is creativity innate? Is it something you're born with? Is it boolean, where you either have it or you don't? Can you nurture creativity out of nothing?


I think we can all agree that some people are more creative than others. Some folks seem to be blessed with an imagination without boundaries or limits. Some are convinced they don't have a single creative cell in their body. Most of us likely feel we are somewhere in between, experiencing moments of creativity but the rest of our lives will be spent following other people's recipes.

For those who aren't self-identified Creatives From Birth, can creativity and imagination be fostered and developed? I believe it can.

I believe that anyone can produce new ideas — which is the essence of creativity — where none existed before. But I want to add a caveat and explanation to that: not all creativity is created equal.

Imagination takes many forms and can be implemented in many ways beyond the arch-typical examples of artistry or musicianship. An engineer that relies on hard work and tenacity to design a more efficient ignition system for internal combustion engines is creative. A health care worker that uses an over-the-counter drug in a new way to ease pain is creative.

Creativity can be found in many places and situations that have nothing to do with art.


The Fallacy of the Big Idea

It is far too common for people to convince themselves that they are not creative because they've never woken up in the middle of the night with some great new idea that is fully developed and complete, a big idea that will solve a huge and vexing problem in a completely novel and ingenious way.

In fact, that kind of "Eureka!" moment is extremely rare. The overwhelming majority of innovative ideas throughout history began as a tiny seed of imagination that was nurtured and developed over time (with a lot of tenacity and trial and error) into something tangible.

It is this nurturing of imaginative embers into a creative bonfire that can be used by anyone to foster their own creativity. Here's how.

Every person is capable of creativity if they are open to recognizing that it may exist as the tiniest spark or fleeting thought. When that happens, and it may not be obvious that it has, the spark must be nurtured. How do you get this seed of imagination to sprout? Focus on it and give that seed what it needs to grow.

The seed of creativity may be a single phrase or sound or observation or even an object. There will be something about it that separates it from the mundane, that realization of, "Hey, there is something new here." Capture it, no matter how small it may seem. Write it down. Doodle it on a napkin. Record your idea into a voice message app on your phone. Or even express your idea to a friend or colleague.

The first step in producing a creative idea is recognizing that you've had one in the first place. Learn to listen for those moments.

To take the next step, use my rule of 10. You don't have to produce the full potential of the Next Big Idea, you only have to take that initial seed and expand it by 10%.

It's easier to edit than to create, so use your initial idea as your starting point and edit it into something 10% bigger than it is. What is the logical next step of the initial concept? What feature or characteristic would make it 10% better?

Don't beat yourself up if you don't make huge leaps forward. You only need to take your idea one step further to get it closer to something useful.

Creativity is often an iterative process, not a single moment in time.

Rely on the collective creativity found in the group dynamic by sharing your idea with others. It's surprising how someone can look at an idea created by another person and say, "It would be great if you added this to it" or "What about tweaking this part here?"

This fresh set of eyes can lead to improvements that weren't possible while working solo. You can even use this new look to your own advantage by leaving your captured idea alone for a day or two and revisiting it later, giving it your own fresh perspective.

There's a saying attributed to Henry Ford, "If you think you can, or you think you can't, you're probably right." The health or death of your creativity can succumb to this powerful internal influence. If you are convinced that you are not creative, you are unlikely to create any new ideas that survive initial contact with your self-defeating brain.

Drummer Vinnie Colaiuta once said, "Thought is the death of flow." He was talking about musical improvisation specifically but his statement applies to creativity in general. If you overthink or overanalyze your own thought processes, the natural engine to innovate within you will be stifled and those seeds of creativity will never germinate and grow.

One of the most common reasons people don't allow themselves to be creative is fear of failure. They are afraid to be judged by others. When their first instinct is to say, "I have an idea," they instead keep quiet, fearful their idea will be ridiculed.

Ted Turner, the famous TV network mogul, was known for his creativity and fearlessness in sharing his ideas. Someone who worked with him commented, "9 out of 10 of his ideas will be worthless, but that 1 out of 10 will be worth millions."

You have the right to think your thoughts. Capture them in private if you must, but give each idea permission to exist, even if you don't share them with others right away. Think them through, then let someone else in on your ideas. They might have a huge impact, but if you keep them to yourself, you'll never know.

Identify and remove the mental barriers you put up whenever you have an idea. Some of the most creative people in the world share one thing in common: they don't filter themselves. They are utterly fearless and unafraid to have a new idea and explore where it can go. Be like Ted Turner and share all ten of your ideas.

Being creative is one part innate hardwiring and one part process. Some people have more of the former than others, but anyone can have a creative idea.

What we have learned about psychology and how individuals are innately hardwired is that some personality types are inherently or natively more creative than others. However, everyone has the capability to be creative through the steps I have outlined above. Creativity takes different forms.

For those who have taken the Core Values Index psychometric assessment, people with lots of Merchant or Innovator energy within their CVI profile tend to be more natively creative than those who are primary Bankers or Builders. This only refers to their starting point, not necessarily their destination.

This means that those who do not have Merchant or Innovator core values in their primary or secondary CVI profiles can still be highly creative people, they will just take a different route to get there. They will also likely express their creativity in different ways.

Be sure to check our list of articles at eRep.com/blog/ to learn more about each core value energy. We also highly recommend taking the Core Values Index psychometric assessment yourself, reading your full profile report, and learning more about how you are specifically hardwired.