Are You Compatible? Using the CVI in Personal Relationships Share: 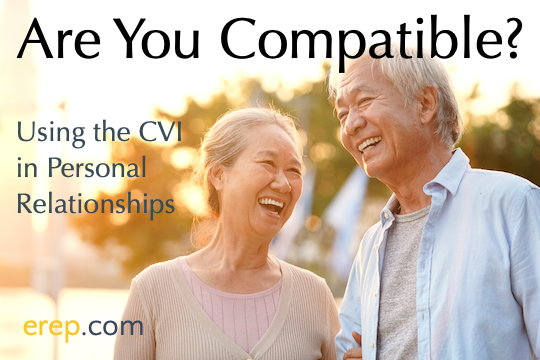 Can a personality test be used to determine compatibility between two people?

It's a simple question with a complex answer, but to a certain level, they can — with some big caveats. This is actually one of the most common uses of personality tests. But what about psychometric assessments, the kind used in the workplace to determine candidate fit to a role?

First, personality tests in general are entertaining but seldom accurate to any useful degree. Sadly, this also applies to many professional psychometric assessments, such as Myers-Briggs MBTI™ or The DiSC™. They might give you some insight into the person at the moment they take it, assuming they're being fully honest, but that may be the limit of their insight.

If you and another person take an assessment and discover you both enjoy piÃ±a coladas and getting caught in the rain, good for you. You probably didn't need a personality test to tell you that, but if it confirms what you already suspected, all the better.

What about sexual compatibility? Can a personality test determine that? Again, most personality tests won't reveal anything you don't already know or are willing to admit. At some point it's merely a comparative list of likes and dislikes between two people.

Yawn. So far we're not talking about anything revolutionary or profoundly insightful.

What you want is an assessment that reveals the true self, the innate part of two people's personality that can't be faked or fudged or skewed based on circumstance.

What you want is an honest and true answer to the question: Am I compatible with this other person?

The CVI measures innate characteristics about your personality that you essentially possess from a very early age. These characteristics define your default behaviors and the way you look at the world. They describe how you prefer to communicate, how you react to stress or conflict, and even your optimal way of learning.

If you and another person know these things about each other, you're well on your way toward determining the ways in which you are compatible.

Note that this is not the same thing as saying, "Determine if you are compatible or not." It may seem subtle, but the difference is worth explaining.


Personality is Not Binary

Your personality is not binary. You are not merely a type A or type B. You are far more complex than that. You are the sum of your innate psychometric personality traits as assessed by the CVI, but you are also the sum of your experiences. These combine to make you truly unique.

You are defined by your nature and your nurture.

Your CVI profile might determine you are a Merchant/Builder, for example, which is something innate and unchanging about you, but you are also shaped by the life experiences you have lived, the challenges you've faced, and even the people you have met.

What the CVI can provide is the innate, unchanging psychometric profile of you and another person. These profiles can be contrasted and compared and evaluated not as a set of two possible right or wrong answers, but as insights about the perspective each of you comes from.

If you meet someone who shares your same CVI profile, they will naturally see the world and prefer to interact with it in much the same way that you do. You will instinctively share a lot of the same priorities in how you communicate and how you solve problems and the way you learn and overcome challenges.

If you meet someone who has a very different CVI profile, the two of you will see things differently and go about things with a different approach and preference. This doesn't necessarily mean you aren't compatible, but it does mean you will have some ground to cover as you learn about your different perspectives. You will benefit by honoring those differences, too.

We know of couples with very different CVI psychometric profiles, yet they have been together a long time. What makes that possible is their realization that they don't need to be identical people in order to get along. They recognize their differences and embrace and honor them, rather than allowing those differences to be a constant source of conflict.

The key to compatibility between people is not sharing the same psychometrics and experiences. It is knowing what your similarities and differences are, understanding each other's unique perspectives, and then honoring and respecting each other as individuals.

The first step is to get the information you need about each other's CVI profile. Go to https://erep.com/core-values-index/ to get started.