A Story of Disengagement 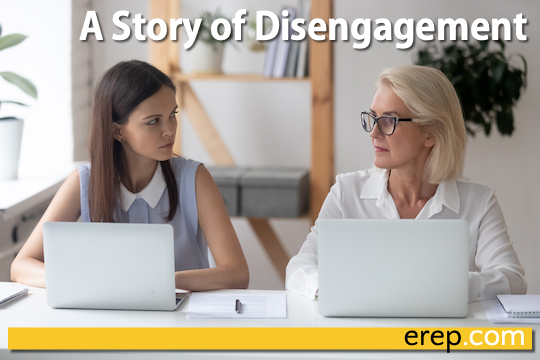 This is a true account of how a white-collar worker who would otherwise be very happy in her profession has become critically disengaged in her role. This is a lesson in how employee engagement gets turned upside down.

Although this is a true account, we're going to use pseudonyms to protect the individuals and company involved.

Our story is about a woman in her 40s in the middle of her career. We'll call her Melissa. She is a senior knowledge worker for a small professional services firm with less than a dozen employees. She's been in her current role for a decade, and in her overall career path for twice that, and up until recently would respond the way most people would when asked if she likes her job.

"My job has good benefits and allows me to pay the bills, but lately things have changed that really make me consider pursuing an entirely different path — anything but what I'm doing now."

Melissa's attitude about her job has taken a serious downward turn in recent months, and most of it has nothing to do with her. Her disengagement stems from how her co-worker is treated.

We'll call Melissa's co-worker Stephanie. Stephanie has worked at the same location about eight years as an office assistant and receptionist. It is Stephanie's job to assist Melissa and the owner with whatever administrative and office tasks they assign to her. She answers phones, greets clients, processes the incoming and outgoing mail and whatever other miscellaneous office duties that come up.

Our main character, Melissa, has a lot on her plate. In addition to her more advanced and technically demanding duties as the owner's right-hand person, she's also the office manager. She is responsible for making sure all IT and other technical aspects of the firm are taken care of, including purchasing new computers, coordinating with outside communications and software service vendors, and even working directly with the company that manages their web site.

The bulk of the owner's workload actually falls on Melissa's lap. She handles much of the heavy lifting before the owner performs a quick review of her work and signs off on it. Sometimes he doesn't even do that, trusting her implicitly to perform the job with thorough accuracy. She's had an impeccable record of producing quality work and at a reliable pace — she meets her deadlines.


And Then Things Changed

Two problems have cropped up in the last year, however. Stephanie is supposed to open the office every morning at 8:30 AM and is to stay until the office closes at 5:30 PM. For the past several months Stephanie has been arriving later and leaving earlier. Her typical arrival time is now 9:30 AM or later, and she frequently leaves her desk and heads home at 4:30 PM.

Even when she's present, Stephanie isn't very productive. During the day, Stephanie spends a great deal of time shopping online or talking on the phone with her family.

This reduction in Stephanie's work hours and focus has had an obvious and predictable impact on her work. She gets less done each day, she misses an increasing number of details by letting more and more fall through the cracks, and even clients have been negatively impacted by the office still being closed when they arrive for morning meetings.

Normally, Stephanie's slacking work patterns and poor performance would be addressed in the usual manner.

In this case, however, two things have happened regarding Stephanie that have made Melissa's feeling of disengagement skyrocket.

First, despite requests by Melissa that the owner do something about Stephanie's poor performance, nothing has been done even though both Melissa and the owner are negatively impacted by it. Stephanie's behavior has never been addressed, and for all intents and purposes, it has been ignored.

Second, Melissa found out that Stephanie receives the same salary as her, even receiving the same performance bonuses. Keep in mind that workers in the United States have the legal right to freely discuss their pay and compensation with each other. It's a clear violation of law for employers to restrict or ban such sharing of information.

Put yourself in Melissa's shoes and imagine how that would feel. You have a higher level position with more responsibilities and you perform your work to a higher standard, yet a co-worker slacks off without any accountability yet still receives the same pay and performance rewards.

What would you do if you were in that situation? How would you handle your motivation on the job after being gutted by witnessing your co-worker's poor performance being ignored while also — ironically — being rewarded?

This is a case of the business leader failing to lead in a responsible, professional, or reasonable manner.

This account is not unusual. It happens daily in organizations across the country. The people may vary and the circumstances may differ, but the core cause remains much the same and the ramifications are consistent.

Disengaged workers who are made to feel unappreciated because of poor leadership find themselves resorting to 'quiet quitting' (active disengagement) or by quitting entirely to work for the competition.

What is the antidote? Business leaders don't gain anything by allowing these types of situations to occur. In fact, they leave a surprising amount of profit on the table by failing to successfully engage their staff.


Hubspot estimates that up to $1.8 trillion is lost from the U.S. economy every year due to employee turnover.

It's a maxim as certain as gravity that if employees aren't happy, customers and clients won't be, either.

Up to 70% of employees are disengaged, and over 20% are actively disengaged. How much slack can engaged workers take up to compensate for this loss of productivity?

If an individual is feeling disengaged, it is likely caused from one or more of these things missing from their job:

Melissa has several possible ways she can act.

She has already conveyed her frustration to the owner and made a specific and clear request that Stephanie's work performance, attendance, and even the pay disparity be addressed. Promises were made by the owner but were never followed through and no action has been taken. Should Melissa bring up her grievances again?

She can just accept things the way they are and keep doing her job to the best of her ability while struggling to 'let it go.'

Melissa can take a passive-aggressive approach by deliberately slacking off to reduce her productivity and attendance down to Stephanie's level. This form of quiet quitting might feel better initially to some, but it's not in Melissa's nature to do that; her work ethic won't allow it to sit well for long and it likely won't change anything in the long run.

The nuclear option for Melissa is to quit and find work elsewhere and take her chances with a different employer. Changing jobs often leads to a pay raise, but forming relationships with co-workers and supervisors is like dating someone new. It takes time to figure out if you can get along and be happy in your work.

Regardless of how Melissa chooses to address her disengagement, or even if she chooses to do nothing, nobody wins. The business owner has one employee who is slacking off on a chronic basis and another who is actively disengaged. Anecdotally, the other employees in the office are feeling just as frustrated.

Melissa isn't the only one disengaged. Stephanie most likely is, too, or she wouldn't be slacking with her hours and focus on the job. The owner should work with Stephanie to determine why she is disengaged and make reasonable corrections as necessary. At worst, Stephanie may need to be let go and someone else brought in who is more psychometrically aligned to the role.

Fixing Melissa's disengagement may not involve Melissa at all. This is yet another situation where one bad apple can ruin the whole barrel.


Go to eRep.com/core-values-index/ to learn more about the CVI or to take the Core Values Index assessment.